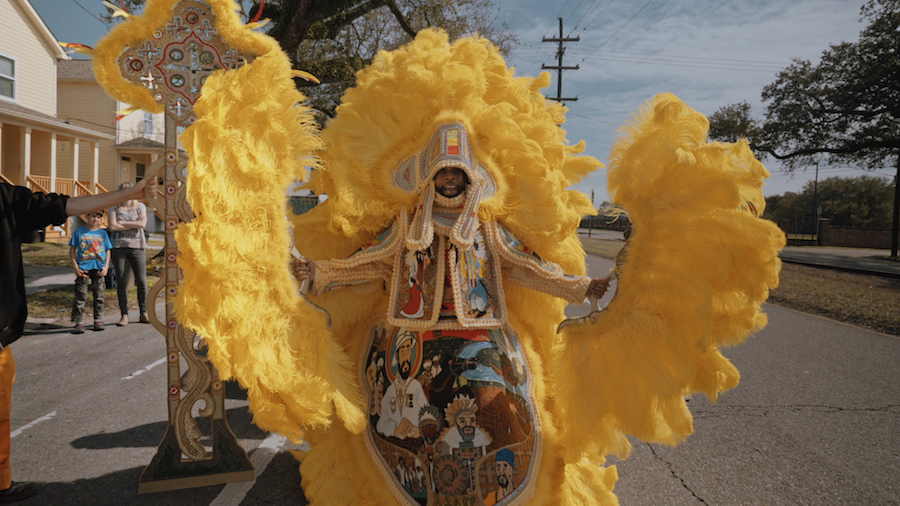 Demond Melancon works solely with a needle and thread to sew glass beads onto canvas. He began this form of art in 1992 when he first became part of a 200+-year-old culture known as the Black Masking Culture of New Orleans. Today as a Big Chief, Melancon is well known for creating massive suits which he wears as a Black Masker in ceremonial battles on Mardi Gras day. The suits he creates are sculptural forms based on the size of his body and are composed of intricately beaded patches revealing a collective visual narrative.

Over the past five years, Melancon has developed an emerging contemporary art practice using the same beading techniques he’s applied over the past 28 years as a Black Masker. His work has been exhibited at the Victoria & Albert Museum in London, Art Miami, the Museum of Contemporary African Diasporan Art in Brooklyn, and the Arthur Roger Gallery in New Orleans. Many of Melancon’s works honor Black subjects historically excluded from the artistic canon, often reflecting untold stories from bygone pasts to remind viewers of their interwoven shared ancestries and diasporic histories. As a self-taught artist, Melancon has been deeply influenced by the masters: from contemporary artists such as Kerry James Marshall, Barkley Hendricks, and Basquiat to Renaissance artists like Caravaggio and Botticelli.

The context of Melancon’s work reflects a broad variety of stylistic influences, features imagery rich with symbolism and meaning, and confronts stereotypical representations of Black identity. Melancon’s work reflects his deep interest in exploring the possibilities of visual storytelling and redefining the traditions of portraiture. Demond Melancon is one of the few artists to pioneer the use of glass beads as an accepted contemporary art medium in the larger arts sector. By reconsidering predominant narratives throughout our history, Melancon deliberately repositions historically overlooked subjects and reimagines institutional portrayal of the Black subject.