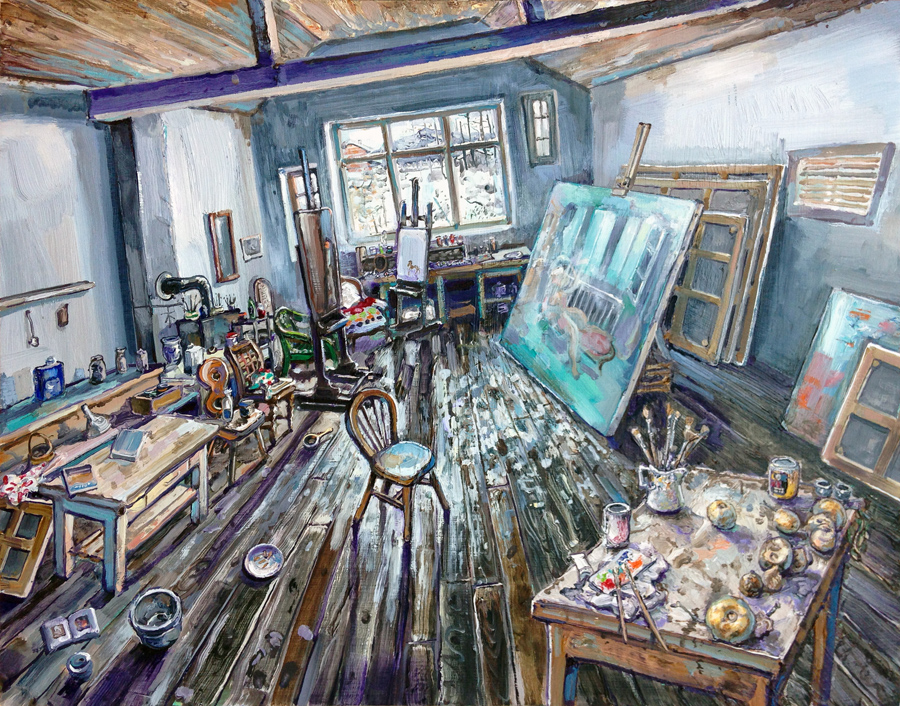 The paintings of Amer Kobaslija encompass detailed representations of artists’ studios as well as cityscapes often fraught with disaster. Regardless of the subject, the perspective is much the same, described as a, “moth’s point of view” or as “standing on a hillside looking down,” giving the viewer a broader but more immediate experience of the subject.

Born in Bosnia in 1975, Amer Kobaslija fled the war-torn country in 1993 for Germany where he attended the Art Academy in Dusseldorf. In 1997, he was offered asylum by the United States and immigrated to Florida where he completed his B.F.A. in Printmaking at the Ringling College of Art and Design in Sarasota, FL. Following, he obtained his M.F.A. in Painting at Montclair State University in New Jersey. He has had numerous solo exhibitions in Paris, New York, Los Angeles, San Francisco, Chicago and Miami In 2013, he was awarded a John Simon Guggenheim Memorial Foundation Fellowship and he is also the recipient of the Pollock-Krasner Foundation Grant (2007) and Joan Mitchell Foundation Grant (2005). His work is in the collection of the U.S. Department of State’s Art in Embassies Program. His works have been reviewed and printed in publications such as The New York Times, Art in America, ArtNews, Art & Antiques, The Village Voice, New York Time Out, New York Magazine, The New York Sun, The San Francisco Chronicle, and The Florida Times Union. He is currently Assistant Professor of Art and Art History at Gettysburg College in Pennsylvania and splits his time between Gettysburg and New York City.