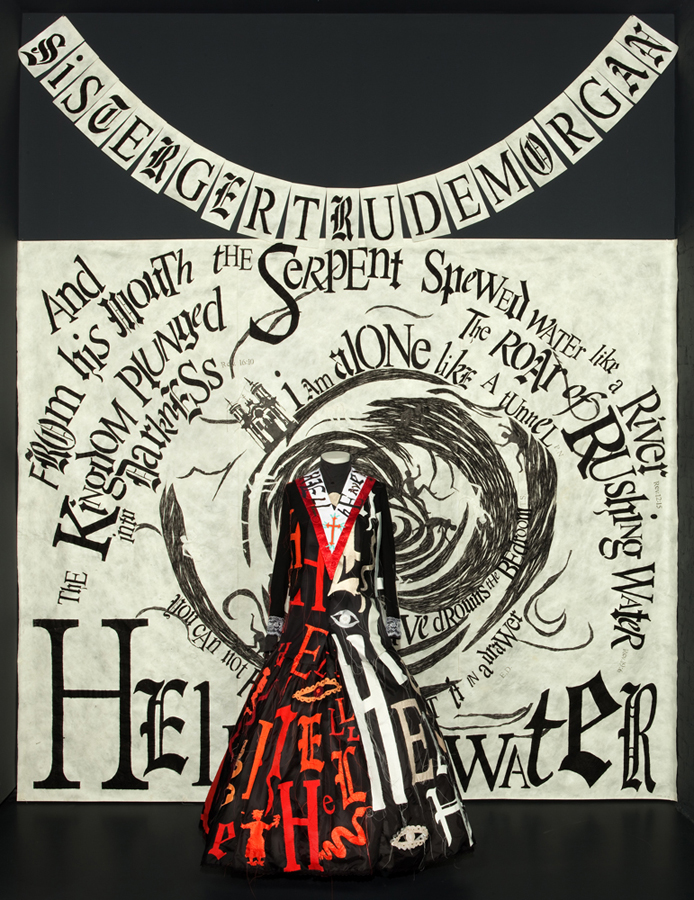 Lesley Dill’s exhibition encounters and is inspired by the life of the late Sister Gertrude Morgan. Especially noted for her folk art, Morgan was a preacher, artist, musician and poet who worked in New Orleans in the 1960’s 70’s, and 80’s. In 1939, she organized an orphanage in New Orleans with two other missionaries. In 1956 Morgan began a career in painting. About the same time she had a divine revelation: she was selected, she said, to be the bride of Jesus, and for the rest of her life she dressed completely in white. Morgan eventually left the orphanage and established “The Everlasting Gospel Mission” in the Lower Ninth Ward.

Dill’s large drawings reflecting aspects of Morgan’s life as well as excerpts from the Book of Revelation line the walls of the gallery from floor to ceiling. These drawings, made of oil pastels and collage on vellum, are titled: Sister Gertrude, Revelations, The Whore of Babylon, Hell and Heaven. The entire space is designed as a progressive story vibrating between heaven and hell. Draping the walls are glass necklaces with words sandblasted on them referencing the poetry of Sister Gertrude Morgan, Emily Dickinson, Pablo Neruda, Katherine Ann Porter, Tom Sleigh and Franz Kafka.

In the center of the gallery are two dresses referring to the life of Sister Gertrude Morgan. The first dress encountered when entering the gallery is a black dress that symbolizes her early life, with red and orange hand sewn letters spelling “Hell Hell Hell” on one side and white letters spelling “Heaven Heaven Heaven” on the opposite side. The other dress is a sumptuous white wedding dress displayed on a veiled mannequin. This dress has 18 white fabric banners that speak to faith, glory and power rising up behind it and symbolizes her revelation in which she received the calling to be the bride of Christ. The dress is adorned with hand sewn fabric letters in various colors that spell “glory,” “calling” and “revelation.”