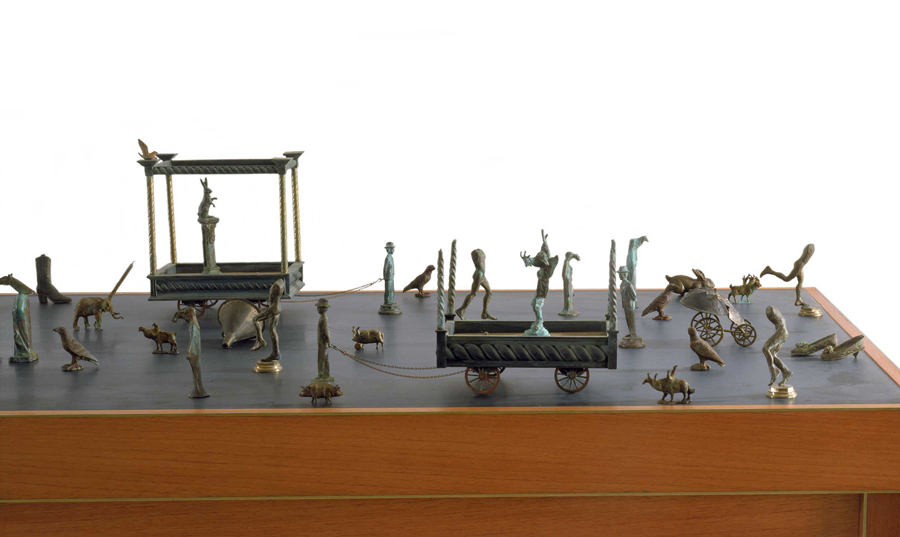 Ersy Schwartz is revered for her work rooted in precise craftsmanship of materials including bronze, silver and wood. Her unique aesthetic is part taxidermy, part reliquary and incorporates elements of surrealism in a visual poetry that often references the pageantry and traditions of New Orleans. Her provocative and intriguing installations evoke both happiness and sadness, and her use of scale and perspective induce a sort of spatial confusion for the viewer.

Ersy was born and raised in New Orleans. She received a Bachelor of Fine Arts from the California Institute of Arts and studied as well at Bard College, The Cooper Union for the Advancement of Science and Art, and Tulane University. She apprenticed with both Enrique Alférez and William Ludwig, two prominent New Orleans sculptors. As an educator she taught sculpture classes including bronze casting at Cooper Union for nearly two decades. In 1993, she and artist George Dureau were commissioned to design and oversee the fabrication and installation of the bronze and steel Gates at North Court at the New Orleans Museum of Art. In 2000, she returned home and joined the Visual Arts Faculty at the New Orleans Center for Creative Arts. In 2011, she received high critical praise for her 40-year retrospective at the Ogden Museum of Southern Art, Ersy: Architect of Dreams.” Ersy passed away in New Orleans in 2015.

Ersy
Hommage to the Society of Ste Anne
2004
Bronze, wood, Plexiglas and brass