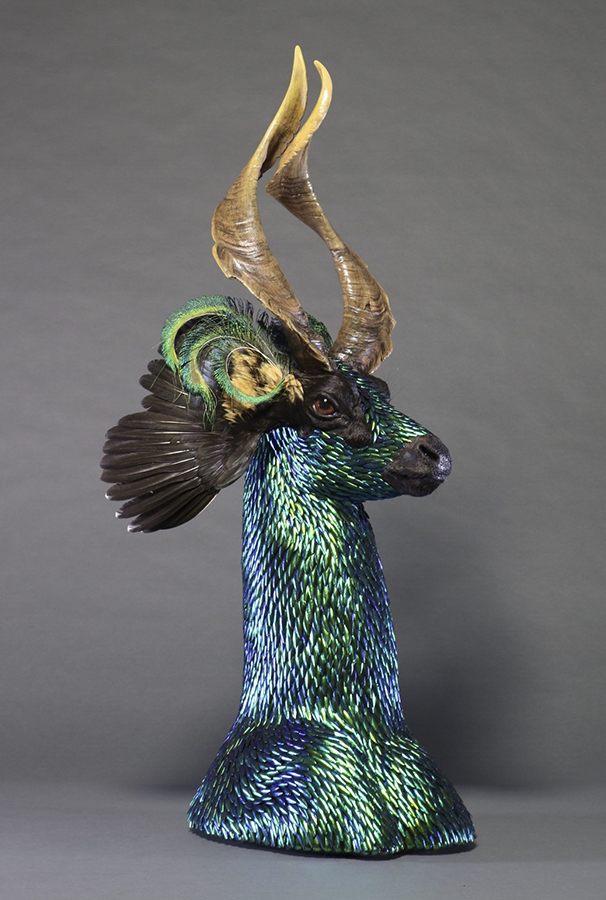 The nearly tangible nature of Cuban-native Enrique Gomez de Molina’s hybrid creatures fascinated him into bringing this body of work into fruition. The curious and exotic nature of the artist’s sculptures is meant to be both fascinating and humorous. The fantastic, unrealistic qualities serve as a visual experience for the viewer and himself.

The fact that these animals once existed, subsequently to be captured and destroyed, creates a sense of woe for the artist. A fond admirer of animals, de Molina strives to preserve the natural beauty of all diverse species. From minuscule insects to evocative birds, a voice is given to animals, which cannot speak for themselves. Through the re-imagined expression of the creatures’ beauty, the audience may see these animals for something extraordinary. Using ecology-sourced skins and feathers of once-living animals, de Molina hopes to bring awareness to the danger faced by a multitude of species: nuclear and chemical waste, overdevelopment, and destruction of rainforests. Genetic engineering and human evolution also account for the conceptualization of these surreal pieces. The notion that all planetary creatures derive from a different makeup puts into question the possibilities for natural and artificial evolution that lies ahead. De Molina examines the direction in which fauna and mankind are headed as a species.

The artist’s descriptive aesthetic yields striking and magnificent pieces. The hand-painted details, as well as the grooming of the fur and feathers, entail an extensive and elaborate process. Using head-mounted magnifier lenses, de Molina, like a mad scientist, intricately crafts and assembles the creatures. This final result, the newly conceptualized animals, holds a timeless quality and value.