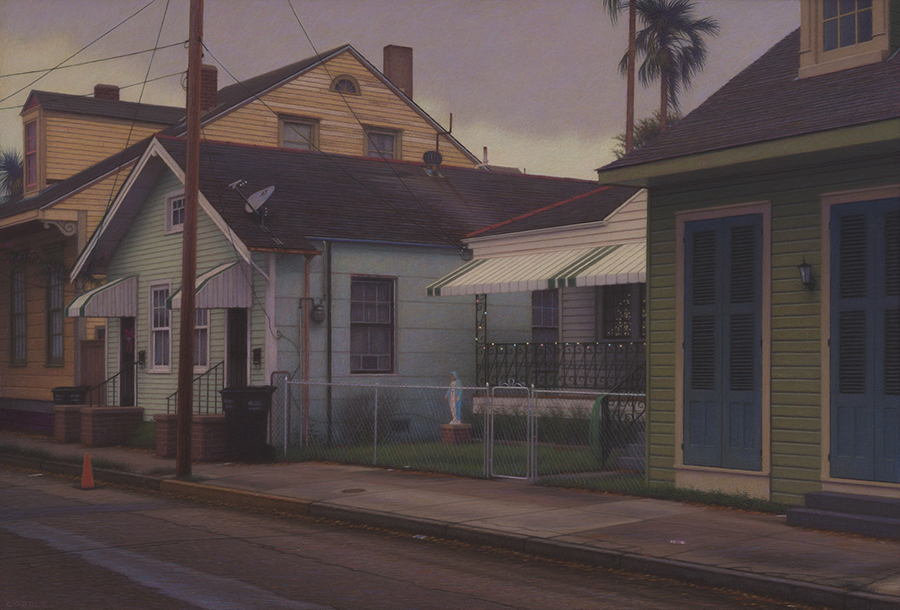 Cobble began his career as an oil painter but now works primarily in pastel. His work depicts the lonely and often barren urban and rural landscape in a photo-realistic manner. Cobble’s works are in the collections of the Dallas Museum of Art; the New Mexico Museum of Art, Santa Fe; the El Paso Museum of Art; the Tyler Museum of Art; and The Columbus Museum, Georgia. His work has been exhibited at The McKinney Avenue Contemporary, Dallas; The Grace Museum, Abilene; the Ogden Museum of Southern Art, New Orleans; and the Butler Institute of American Art, Youngstown, Ohio, among others. Cobble is represented by Valley House Gallery and Sculpture Garden in Dallas, Texas. He lives in Albuquerque, New Mexico with his wife Julie, a biologist, and a passel of dogs.

“Certainly, Cobble’s technical artistry is a magical, compelling quality in his work, but not the only such quality. He is able to compose a horizontal rectangle quite as well as any living painter of any style. At first glance, we may think that we are looking at a painting based on one photographic image, but on examination, we begin to suspect what is there is a synthesis of details from several sources placed together to orchestrate a system of values, linear forces, colors and shapes that have likely never existed before in quite this arrangement. …Cobble sees the landscape superimposed with fences, artificial waterways, refineries, quickly install human habitation projects, trailer parks, asphalt slabs, and on and on and on. He paints the outward signs of a mobile seminomadic human culture, a culture in constant change. He often quotes his Skowhegan teacher, Willard Midgette, as saying that he thought it strange that so many artists painted landscapes as if they had just walked into a world without cars or telephone poles. To the earlier American artists who saw landscape as a beautiful (pastoral) or sublime (wild), a third category needs to be added to cover the commonplace.”