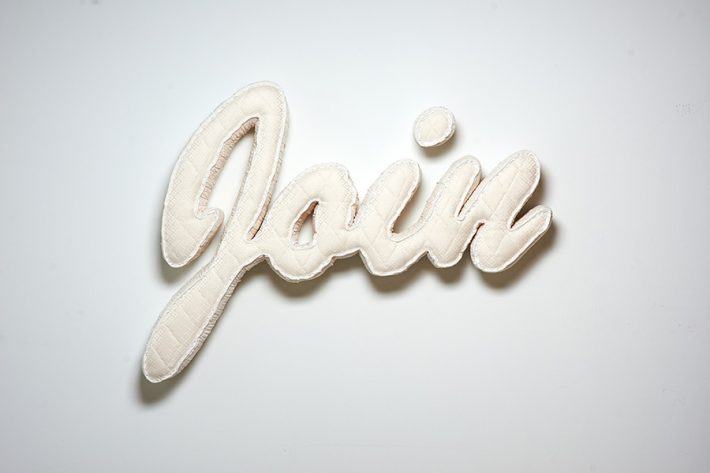 “Ladies and gentleman,” rings out the deep cowboy-voiced introduction to the “Lost in Love” radio show on KRVS 88.7 FM in Lafayette and Lake Charles, on air every Saturday evening at 5 pm and on Tuesdays at 1 pm. “It’s my unmitigated pleasure to introduce to you tonight a fine fine lady who I’ve known for quite some time. She’s news in New York, she’s the fairest in Paris, she’s Renella Roooose Champagne. Put your hands together now.”

Multimedia artist Stephanie Patton, under the guise of her alter ego, laughs, greeting her listeners in her signature Southern accent, “Well howdy partners!”

It’s certainly possible that most fans of “Lost in Love” might never know that their campy, country-music-loving DJ is actually an internationally-shown visual artist, nor that they are participating in her larger body of artwork that is the story of Renella Rose Champagne. They’re just here for the music. 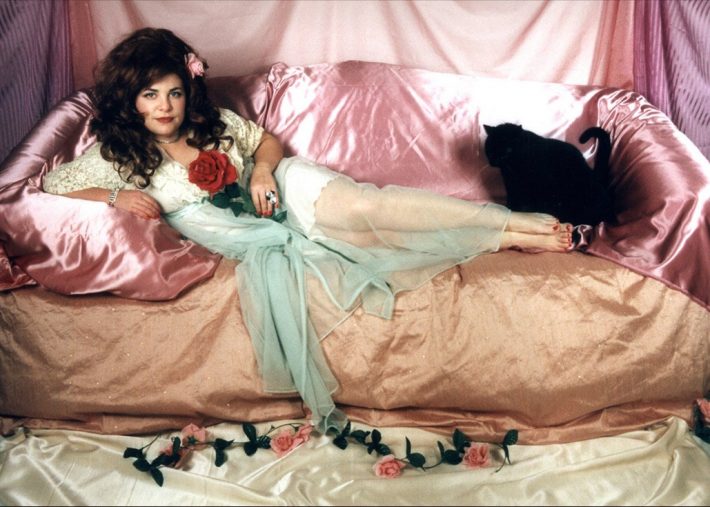 “The thing about Renella,” said Patton of the big-haired, Dolly Parton-esque character she first created in 1992, “is that in my performance there have been all these times where there is a brush between fantasy and reality.” The most famous example of this was Renella’s wedding to Jack Rivas’ character Junior Rivas, produced in 1993 by Patton and announced in The Daily Advertiser newspaper in Lafayette. “People didn’t know it was fictitious,” she said, “My sister even went to a friend’s bridal shower, and old ladies there were talking about ‘that little girl laying on her dress in the newspaper’.”

Renella has emerged in the form of self-portraiture, video, and live performances throughout the course of Patton’s career, and was even featured in a New Iberia television advertisement for Nationwide Manufactured Homes. “Now, doing the radio show has kind of kept the character going, but it’s also a real radio show, and I really do love the music that I play.”

“THE THING ABOUT RENELLA,” SAID PATTON OF THE BIG-HAIRED, DOLLY PARTON-ESQUE CHARACTER SHE FIRST CREATED IN 1992, “IS THAT IN MY PERFORMANCE THERE HAVE BEEN ALL THESE TIMES WHERE THERE IS A BRUSH BETWEEN FANTASY AND REALITY.”

The “Lost in Love” playlists, Patton noted, are connected by the language of country music (and these days, disco and other eighties party genres, too), but also by themes of intimacy and relationships and emotions—all of which are recurring issues explored across her vast and diverse body of work. “But . . . it’s funny too,” she said. 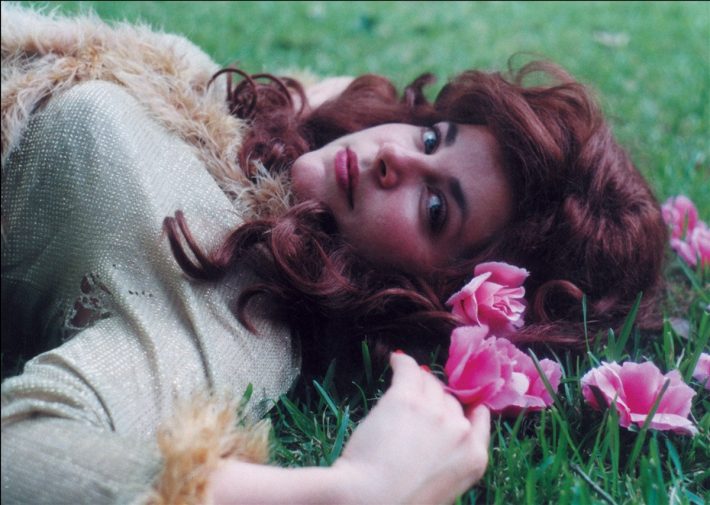 The integration of humor into her work goes as far back as high school, when she was borderline obsessed with Saturday Night Live, and had every intention of pursuing a career in theater. But over the course of her time at the University of Louisiana-Lafayette, she found herself dabbling in a bit of everything: “I took a drawing class, and the teacher told me I should do visual arts, so I ended up focusing on that. But I took as many photography classes as I did painting classes, and I was going back and forth with sculpture. I took classical voice classes in the musical department, where I studied opera really. I was truly interdisciplinary.”

Patton credits those years, her fellow art students, and her teachers at ULL—who included artists Allan Jones, Lynda Frese, and Dee Carnelli—for helping her to discover her voice. “I remember I had this sculpture class,” she said. “A friend of mine gave me a pair of her boyfriend’s Fruit of the Loom underwear. I made the bottom half of a man’s torso, then added two mopsticks for legs. And it was this really funny and kind of creepy piece. My sculpture teacher [Carnelli] told me, ‘You know, there are people out there doing what you are doing, and it is valid. People are being taken seriously doing humorous work.’ It was amazing advice, to just let yourself be you and have faith in what you are doing.” 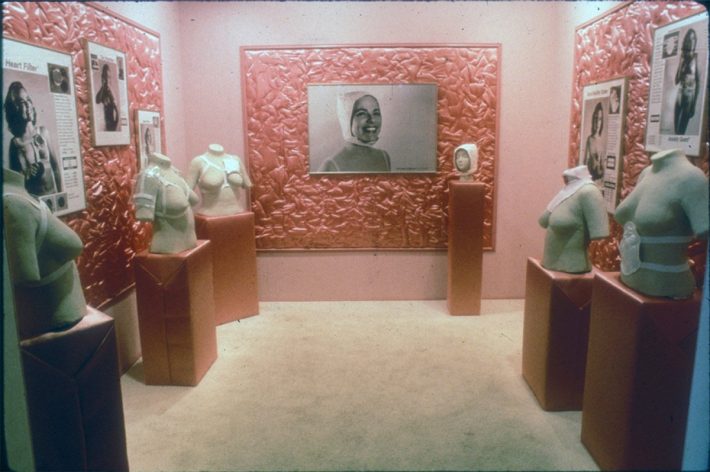 Wandering through Patton’s most recent exhibition, the survey Stephanie Patton: Comfort Zone, 1993–2021 at the Acadiana Center for the Arts, it’s easy to find the humor. Some of her earliest works from Renella’s Lingerie Showroom (1997), which was also her thesis at The School of the Art Institute of Chicago, include a series of self-portraited advertisements presented in the styles of vintage mail order catalogues offering products like the “Heart Filter” (“Interchangeable filters allow for weeding out the undesirable characteristics in a potential mate.”), the “Overnight Invigorator,” or the “Anxiety Guard”. A wall of negligees from her period of musical performances from 2002–2005 with collaborated Walter Pierce (also known as “Chablis”) enjoys a prominent place in the exhibit space. “Bronzed SAS Shoes (size 8)” is a grand presentation of a pair of Patton’s grandmother’s shoes, which she sent off to the American Bronzing company, a company that often bronzes babies’ shoes for parents.

“MY SCULPTURE TEACHER DEE CARNELLI TOLD ME, ‘YOU KNOW, THERE ARE PEOPLE OUT THERE DOING WHAT YOU ARE DOING, AND IT IS VALID. PEOPLE ARE BEING TAKEN SERIOUSLY DOING HUMOROUS WORK.’ IT WAS AMAZING ADVICE, TO JUST LET YOURSELF BE YOU AND HAVE FAITH IN WHAT YOU ARE DOING.” 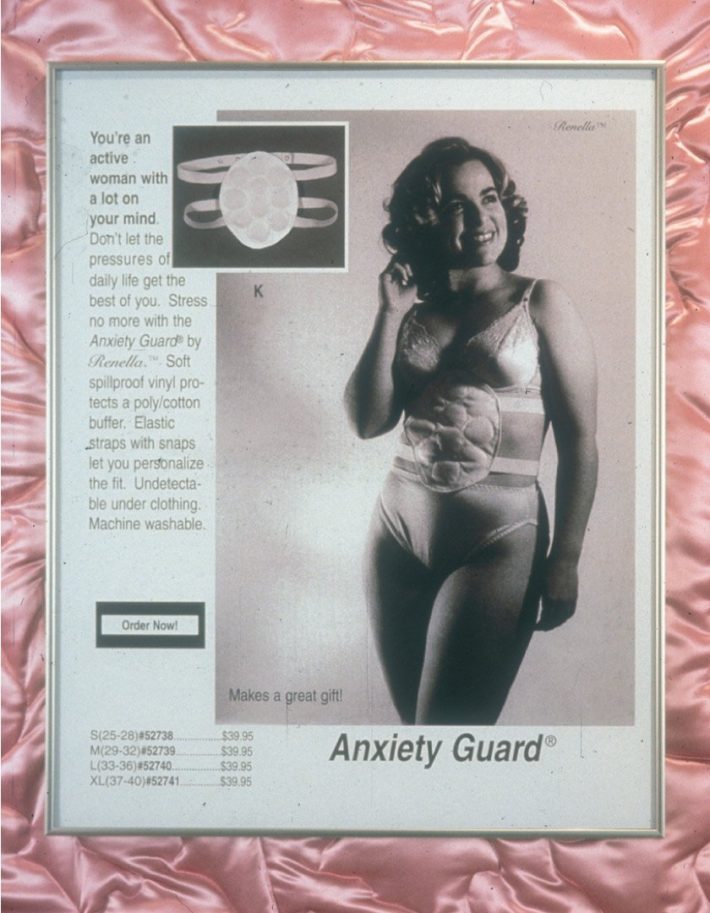 Turning tradition and society’s veneration of youth on its head in a way that is simultaneously funny and sobering (The pedestal that the shoes sit upon is mirrored, reflecting the viewer’s own inevitable aging.) is a touchstone of Patton’s work. Another example is her video, “Heal” (2011), in which Patton plays with the cliché “when life gives you lemons, make lemonade” by cutting and squeezing lemons for forty eight minutes straight before stuffing one lemon with batting and sewing it all back together. “This endurance-based piece captures the absurd and exhausting repetitiveness of this act and reflects on how much work is involved in the healing process,” she says in the piece’s accompanying statement. 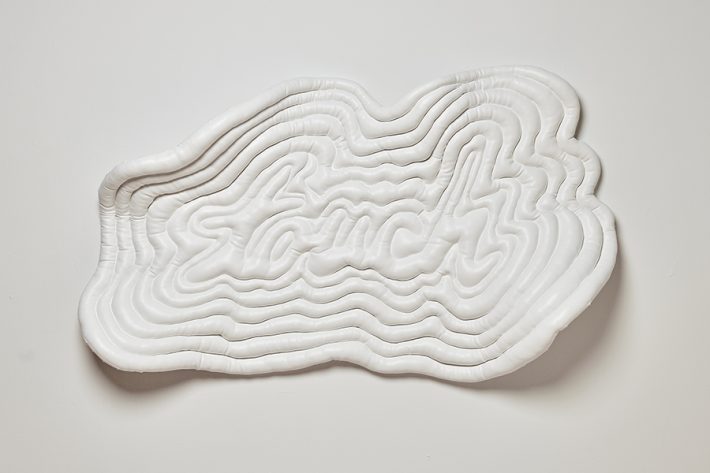 Health—physical and mental—and healing recur as themes throughout various phases of Patton’s career. In her most recent projects, it has arisen in the form of her mattress and vinyl works.

“Conceptually, mattresses can represent birth, death, intimacy, and more,” said Patton, who is the daughter of three generations of mattress salesmen. “There’s just so many layers to it, relationships, aging, rest.” Featured in Comfort Zone are some of her more recent mattressed messages: “Be careful what you wish for,” “Us,” “Wait.” “I like words that have multiple meanings. Like ‘wait’ can mean so many things: ‘don’t die,’ ‘please don’t leave,’ it can refer to intimacy issues. A lot of words go back to the idea of emotional connections and references.” 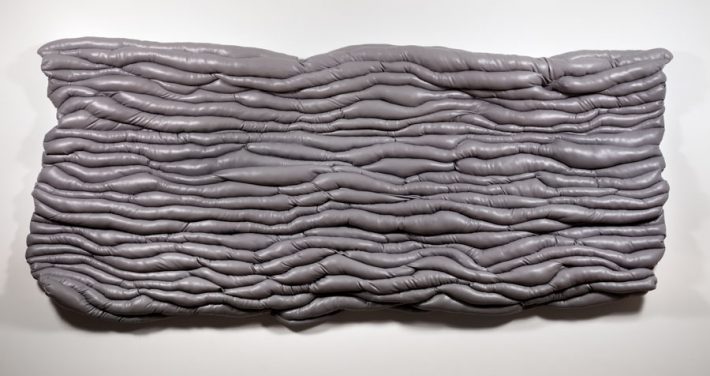 Patton created “Join” in the middle of the pandemic of 2020. “I was thinking a lot about people doing this together, coming together. It was such a historic moment in time for everyone. And then also the conversations on racial equality. . . it’s what I was thinking about at the time.”

“CONCEPTUALLY, MATTRESSES CAN REPRESENT BIRTH, DEATH, INTIMACY, AND MORE,” SAID PATTON, WHO IS THE DAUGHTER OF THREE GENERATIONS OF MATTRESS SALESMEN. “THERE’S JUST SO MANY LAYERS TO IT, RELATIONSHIPS, AGING, REST.”

Featured prominently in Comfort Zone, the word takes on a new meaning as the pandemic begins to relinquish its grip and we rejoin each other in embraces, in society, in art galleries. “The timing was amazing,” said Patton, who said curator and Visual Arts Director of ACA Jaik Faulk captured her vision perfectly. “People were able to come out after getting through the pandemic, but it also just feels like the right time in my personal career to show the changes and evolution of it. To be able to collect that amount of work and reflect on it, I’m learning things about myself. And I feel as though I’m just getting started.”

Comfort Zone is on display at the Acadiana Center for the Arts until September 11, 2021.  See more of Patton’s work at stephaniepatton.com.