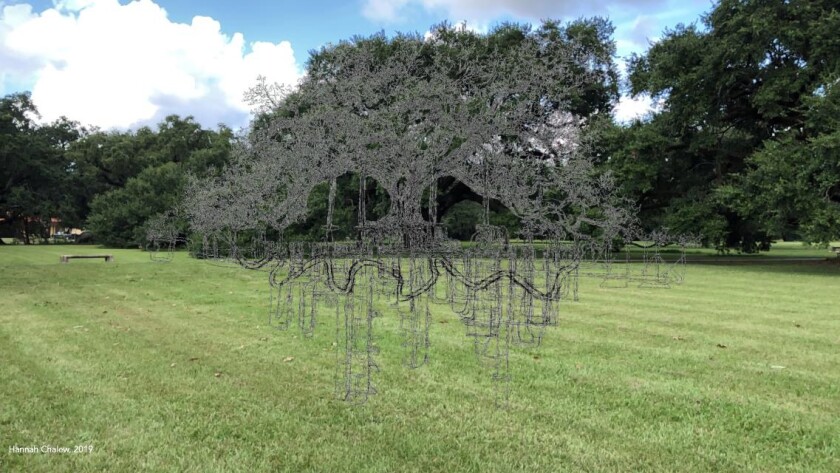 There’s an 800-year-old oak tree in New Orleans City Park, a great big, craggy and handsome planting. It’s named for the late John McDonough, a philanthropist who was also a slave owner and white supremacist.

On Saturday another tree — a hand-drawn, life-sized replica of the McDonough tree — materialized in front of it, completely obscuring the commemorative oak. The work, “Toxic Ecology” by New Orleans artist Hannah Chalew, is invisible to the naked eye, visible only through a free phone app called 4th Wall and pasted into the landscape via augmented reality technology. When viewers point their phones toward the tree, the artwork appears onscreen along with the real surrounding landscape.

“I live close by and am fascinated by this centuries-old tree that we’re literally propping up with big wooden beams,” Chalew said of the draping oak, with its gnarled roots clawing at the ground. “In my drawing, I’m imagining how the legacy of white supremacy still takes root in our landscape. It upholds and makes possible the petrochemical age — the new face of racism and capitalism — exploiting our landscape and people.”

The work is part of the New Orleans AR public art exhibition “Battlegrounds,” conceived of and curated by Los Angeles artist Nancy Baker Cahill, who created 4th Wall. Baker Cahill invited 24 New Orleans artists to choose a location that they felt was contested, a battleground of sorts. A sugarcane plantation, gentrified neighborhoods, prisons, polluted waterways and confederate statues are all represented in the exhibition. She then asked artists to pair one of their artworks — drawing, painting, sculpture, video art and photography — with their chosen site to “activate, illuminate or further augment its meaning or history.”

The 30 AR works in the exhibition have been geolocated and “placed” on-site, some with sound elements. Visitors can follow treasure map-like directions on the app to find them: “Go to: Congo Square … find the biggest tree …” one artist instructs. An online gallery of the works with artists’ statements is on the 4th Wall website so anyone, anywhere, can click through the exhibition.

“I’ve always had an abiding interest in the Civil War,” Baker Cahill said. “I’ve been thinking a lot about our current moment, how it feels like a cultural civil war. And it felt urgent to wade into the literal swamp of these difficult conversations, these thorny issues and get at the heart of it, even if it’s uncomfortable. And artists are the ones to lead that charge.”

“Battlefields” grew out of an AR exhibition that Baker Cahill and artist Debra Scacco curated at the L.A. River in 2018. The eight artworks in “Defining Line” took on environmental issues, immigration and urban redevelopment. Baker Cahill wanted to replicate the model but on a much grander, citywide scale. L.A. could easily have been the canvas — Baker Cahill intends to stage a sprawling AR exhibition here in the future — but after a research road trip, New Orleans made the most sense.

AR was a fitting medium for this type of so-called art activation, Baker Cahill said, especially in New Orleans.

“It’s a subversive medium and a shared collaborative medium,” she said. “But also, this is a city that has been affected by climate change to an outsized degree. So we need to work with mediums that don’t cause any environmental harm. We’re not digging anything up, we’re not waiting years or months for permits or worried about lawsuits, creating litter. It’s an ephemeral medium.”

Artist Lily Brooks paired a photograph of a tree on flooded ground with the Bonnet Carré Spillway for her “Tree and Kudzu Near Site of Kugler Cemetery.” The Spillway, built by the Army Corps of Engineers in 1931, functions as a flood control structure. But the site formerly housed sugar plantations, and two unmarked graveyards lie underground, the Kenner and Kugler cemeteries, which house the remains of slaves and their descendants.

Ana Hernandez’s “Slavery Time” places an assemblage artwork on a deconstructed book at the intersection of Chartres Street and Esplanade Avenue. The area was an active slave market, where human beings were caged in pens.

“I was thinking about trauma rooted in narratives,” Hernandez said, adding that the slave pens in the work are also a nod to detained immigrants in U.S. holding cells today. “People who are waiting for their inevitable, unforeseen fate.”

Destructive forces connect the elements in Kristin Meyers’ “Cyclone,” in which a sculpture made from the invasive cat’s claw vine whirls in the air over a Civil War cannon at Washington Artillery Park. Jan Gilbert’s “Call to DisArm: Yearbook, 2011-19, Snow Job Sound by Metronome the City” pairs a collage of gun violence victims’ obituaries with the Murder Board memorial at St. Anna’s Episcopal Church in New Orleans. Keith Calhoun’s “Sunlit Nightmare” addresses gentrification. The work features a photograph of a home’s decimated foundation after Hurricane Katrina, backed by an apocalyptic-looking, burnt orange sky, obscuring the new home that’s been built in its place.

“It’s about memory,” McCormick said. “The religion has been mischaracterized a lot of the time; it was a form of spiritualism. Because of how they practiced and what they practiced and that energy that came from the space, I wanted to honor them.”

Dawn Dedeaux’s “Acid Frog: Search and Rescue” places animation stills of her Acid Frog character, from her video series “The Adventures of Acid Frog and Friends,” over the Louisiana Superdome. They soar, like superheroes, over the sports arena.

“It’s a landmark of failure, the dome during Katrina,” Dedeaux said. “We should never forget this place of exuberance and celebration and sports was also a place of suffering for people who lacked the time or resources to escape the approaching storm.”

“Every artist in this show, whether it’s quietly and poetically or more outspoken, are engaging directly with their community, with their environment, with their history, their own lived experience,” Baker Cahill said. “And as a result, the stories are extraordinary.”