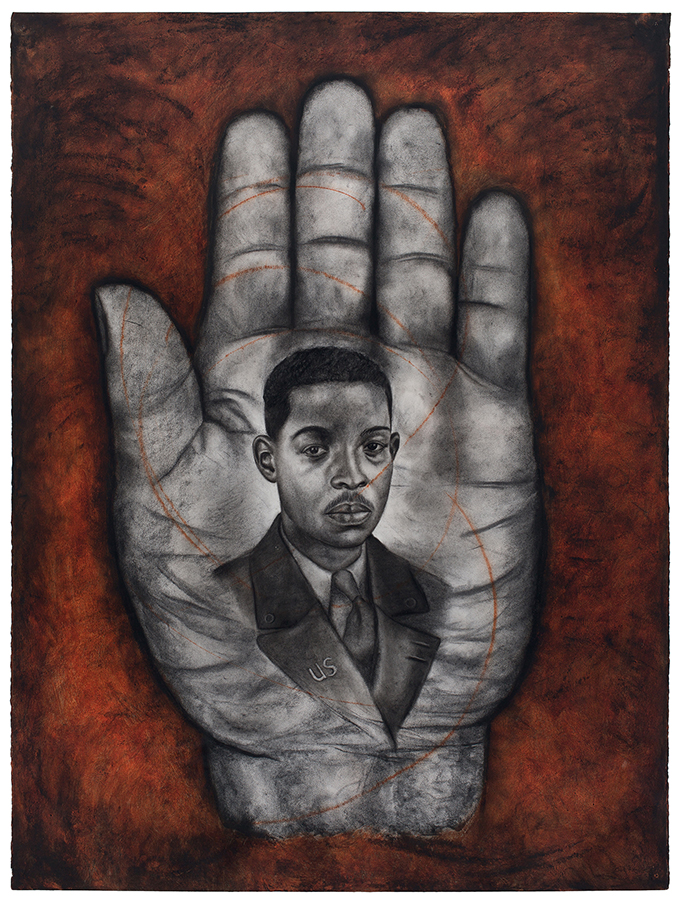 Whitfield Lovell: Marks in Time is the artist’s fourth exhibition with the gallery. Included are a selection of bold assemblages of charcoal drawings on vintage wood paired with multivalent objects collectively illuminating the African American experience. Also exhibited are a group of Lovell’s Hand series and large-scale drawings featuring portraits on clothing. The latter two series are oil stick and charcoal on paper.

The large-scale hand drawings are excellent early examples of Whitfield Lovell’s combining of iconic imagery and portraiture. The artist first created large-scale drawings in charcoal and oil stick during his Skowhegan residency in 1985. The series included in Whitfield Lovell: Marks in Time were created in 1995 and 1996 when he received a prestigious grant from the Joan Mitchell Foundation. Lovell states, “I began collecting hands after I had already been using hands in my work. The more I learned about the iconography of hands, the more excited I was to continue with the theme. Also, my interest in collecting crayon portraits came simultaneously with the images in the Hand Series, though I didn’t consciously think about it at the time … There has always been a reason for my wanting to own certain objects more than others. I’ve tried to be a focused collector so that I was spending my money on things that fed the work.” Lovell is an avid collector of village photographs, especially phtogpgraphs depeicing Black subjects.

Lovell’s work is inspired by his fascination with history as well as stories told by his grandparents. His portraits are referenced from his large collection of photos of unidentified Black subjects from the the Emancipation Proclamation to the Civil Rights Movement. He states, “The importance of home, family, ancestry feeds my work entirely. African Americans generally were not aware of who their ancestors were, since slaves were sold from plantation to plantation and families were split up.” The men and women featured in Lovell’s work, although with faces often weighted with strife, reveal consummate strength and determination.

Whitfield Lovell was born in 1959 in New York City. He received a BFA from Cooper Union in 1981. His work is in the collections of the Metropolitan Museum of Art, the Whitney Museum of American Art, the National Museum of American Art, the Seattle Art Museum, The High Museum if Art, Phillips Collection, National gallery of Art, SmithonianNational Museum ofAfrican American Histoyr and Culture, New Orleans Museum of Art, and many more. He is a 2007 recipient of the John D. and Catherine T. MacArthur Foundation’s Fellowship Award. Lovell has been exhibited in numerous and museums including Inbox: Whitfield Lovell at the Museum of Modern Art in 2017 and Whitfield Lovell: Kin Series & Related Works at the Phillips Collection in Washington, DC in 2016-17.