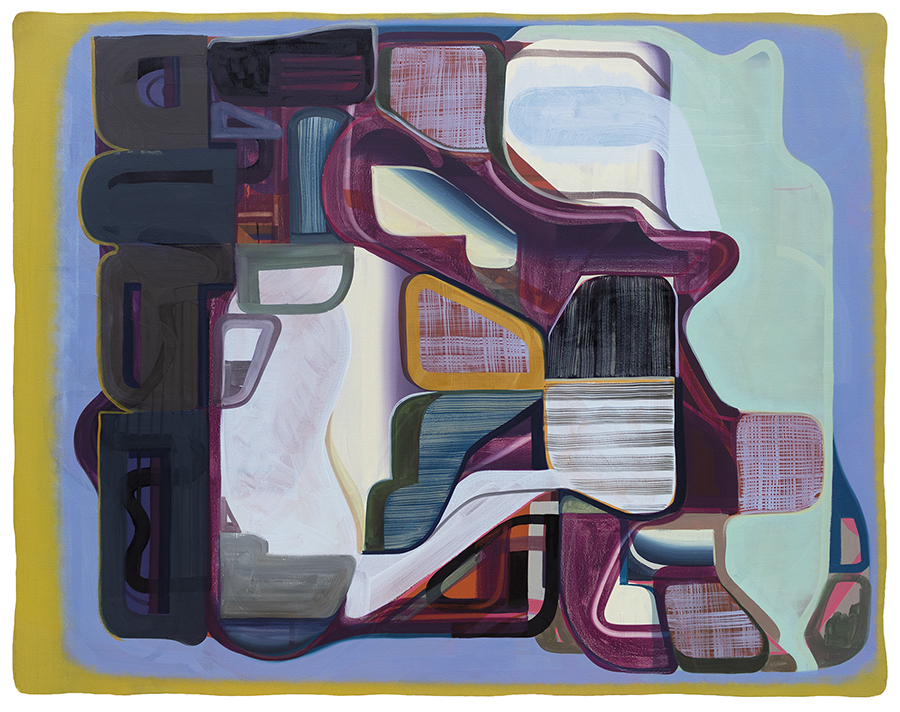 The exhibition will comprise 21 pieces. Ten are medium- and large-scale paintings are on linen while the remaining eleven small-scale works are ink on paper. The paintings are abstract but suggest references to architecture, landscape, and human forms. The paintings invoke a sense of pareidolia, a psychological phenomenon whereby the viewer sees a face or some other familiar image in an abstract pattern. Tom’s abstractions are amalgamations of dissociative forms, colors or patterns forced into a given matrix and left to coexist in this tenuous community of various visual vocabularies. In fact, the opportunity for play extends to the stretcher bars themselves which are hand-cut in playful and wobbly forms that humanize the paintings.

The works on linen include a series of symmetrical diptychs. While the sides are similar, they are not exactly the same. Imperfection is built into the process because Burckhardt always starts with a single panel, with the blank one set aside until the first is completed. An improvisational artist, he works the paint onto the linen, sometimes using a roller to cover an area yet allowing the under-layer to peek through until he arrives at something he considers finished. This and everything else on the first side has to be redone in reverse on the second side. By working on two sides at different times, and then abutting the so-called original and its mirrored copy together, Burckhardt calls attention to the paradox of a symmetrical image that is physically split down the middle: it is at once total and divided.

Tom Burckhardt was born in New York City in 1964 and has spent his entire life living there. He graduated with a BFA in painting from SUNY Purchase in 1986 and attended the Skowhegan School of Painting and Sculpture that same year. He has been exhibiting since 1992 at various NYC galleries such as Tibor De Nagy Gallery, Pierogi and Caren Golden Fine Art, and the Gregory Lind Gallery, San Francisco CA. His most recent solo show of paintings was at Gregory Lind Gallery in Spring 2019. He participated in the 2016 Kochi Muziris Bienalle in Kerala, India and that installation piece, “Studio Flood” was shown at the Pierogi Gallery, NYC in September 2017 and CMCA in Maine during Summer 2018.