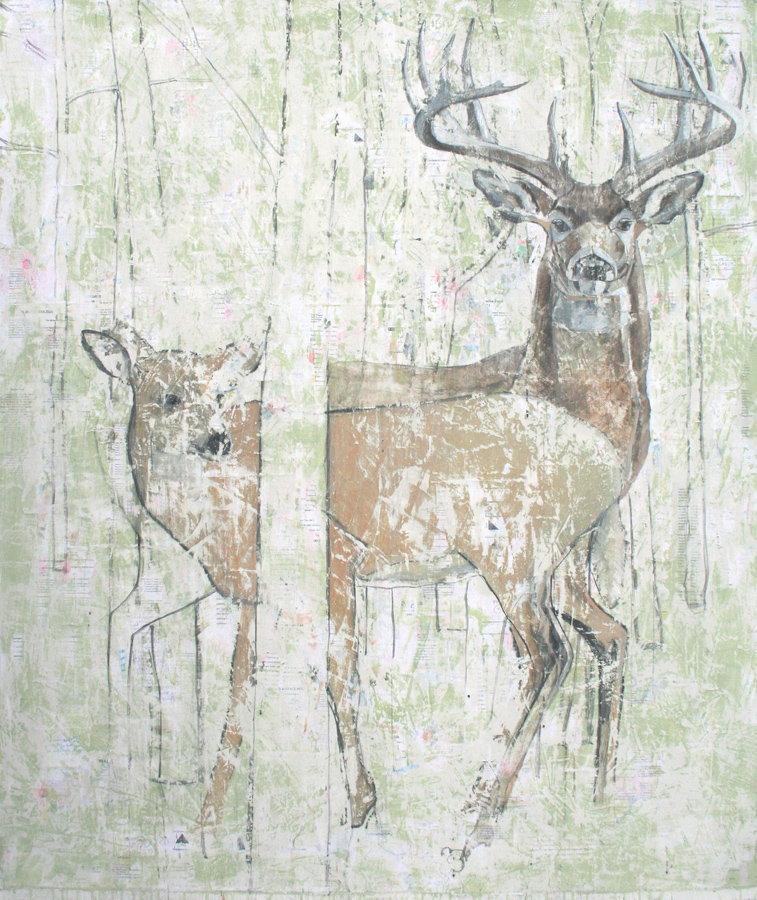 Nicole Charbonnet has taken the title of her exhibition, “Build Your Cities,” from a quotation by Nietzsche:

The secret for harvesting from existence the greatest fruitfulness and the greatest enjoyment is: to live dangerously! Build your cities on the slopes of Vesuvius! Send your ships into uncharted seas! … Soon the age will be past when you could be content to live hidden in forests like shy deer! At long last the search for knowledge will reach out for its due: — it will want to rule and possess, and you with it!

For Nicole Charbonnet, just as history is the written experience of the debris of the past, art is the visual manifestation of that experience. Her work is about memory and her creative process is analogous to the way our minds retain ideas, feelings and images. Paintings are built up with layers of literal debris from the artist’s life including letters, receipts, books, and fabric. Appropriated images, described by the artist as “rescued fragments and artifacts of the omnipresent cultural world” are incorporated. They include film stills, cartoon characters, superheroes and iconic photographs. There are also images from important works by noteworthy artists like Picasso, Ellsworth Kelly, Sol LeWitt, Louise Bourgeois and Damien Hirst. The surfaces of the paintings are cut, sanded and scraped to reveal a palimpsestic “memory” of preexisting stages. The images, distressed by the attempt at erasing them, stand like architectural ruins from the past – impotent in function but potent in meaning. The artist states, “Both form and content in my work are a commentary on not just epic themes of humanity and mortality, but a more Freudian statement about perception, desire, community, the illusion of originality and the anxiety of influence.”

Nicole Charbonnet
After the Storm #5
2012
Acrylic, plaster and paper on canvas
72 x 60 inches