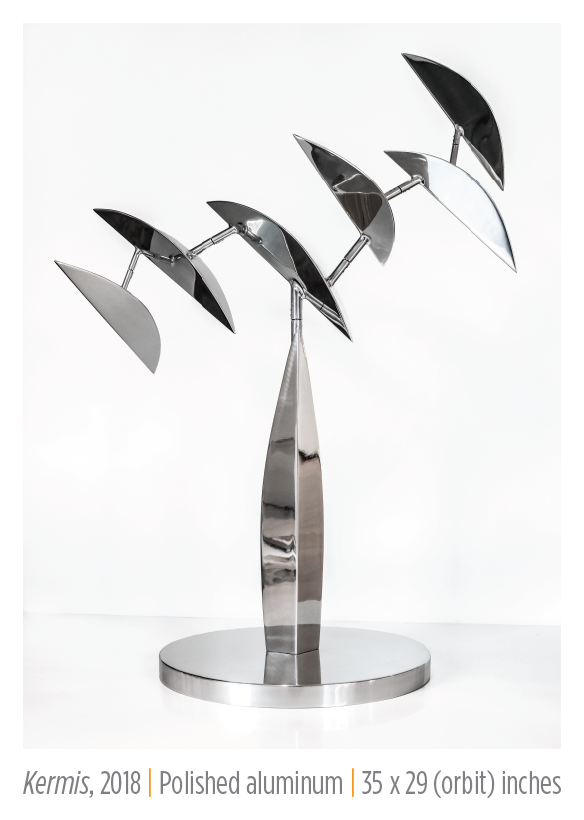 A Force of Nature

Lin Emery: A Force of Nature

The Arthur Roger Gallery is pleased to present Lin Emery: A Force of Nature, an exhibition of kinetic sculpture by Lin Emery. The exhibition will be on view at Arthur Roger@434, located at 434 Julia Street, from February 2 – 23, 2019. The gallery will host an opening reception with the artist in attendance on Saturday, February 2 from 6 – 8 pm.

Lin Emery is best known for her wind-powered sculptures made from industrial-grade aluminum that she has welded and polished to reflect light. Emery’s sculptures composed of abstract forms are inspired by nature and powered by natural energy sources. Throughout her lengthy career, Emery has investigated different methods of incorporating form with movement. Emery’s body of work includes the creation of aquamobiles (water), magnetmobiles (magnetic force), wind-powered works, and even musical sculptures. Lin Emery has contributed much to the development of kinetic art. Yet, she has never stopped to rest on her laurels. Responding to the changing world around her, Emery continues to create compelling new sculptural forms, and her work remains sought after for lofty museum collections and private homes as well as for major architectural commissions. Lin Emery’s nature-inspired kinetic sculptures are powered by natural forces. A force of nature herself, Lin Emery is an artist to admire.

Frequency of form, balance points and the interruption of the counterpoise all influence the various rhythms of the works. The artist tunes each of these variables to achieve the desired consonance and then relinquishes the ultimate performance to the sculpture itself. Emery says, “Sculpture is living, it’s vital, it’s changeable. Even when you walk around it, it can be something different. Drawing is a reflection and coordinating eye and hand, but sculpture is your mind and an idea.”

Emery has exhibited throughout the United States as well as in England, Japan, Australia, Germany, and France. In 1996 Emery had an acclaimed comprehensive retrospective exhibition at the New Orleans Museum of Art. In 1997 she completed an immense abstract kinetic sculpture for placement in Osaka, Japan and was awarded the Grand Prize for Public Sculpture in Japan. Emery also installed a major sculpture in the Zen Garden of the Hohen-in Temple in Kyoto, Japan. In Louisiana, her public commissions can be seen throughout the state at sites including the Louisiana State Library in Baton Rouge, Knight Oil Tools and The Neurological Hospital in Lafayette, the Sydney and Walda Besthoff Sculpture Garden, the Renaissance New Orleans Arts Hotel and the Intercontinental Hotel in New Orleans. Emery is the 2012 Ogden Museum of Southern Art’s Opus Award honoree and a 2013 winner of the biennial Kinetic Art Exhibition and Symposium.