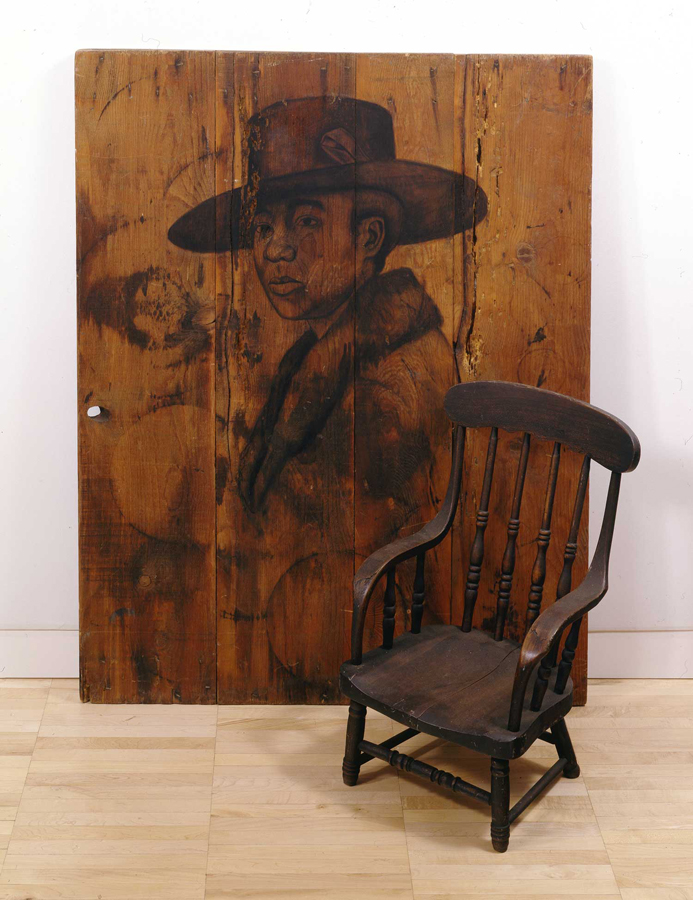 In this exhibition, we see an ongoing exploration of the African American experience through an installation of Whitfield Lovell’s charcoal on wood assemblages created over the past decade. Lovell continues to incorporate found objects in his work which create a strong sculptural presence that invokes issues of cultural heritage and personal identity.

The artist carefully selects the pieces of old wood used for each work, paying particular attention to the natural textures and remnants of color left by layers of paint or wallpaper. The knots and growth lines in each piece of wood make the background for each charcoal drawing as unique as a fingerprint, reminding us of Lovell’s early 90s series of oil-stick and charcoal drawings of hands.

Generally, his subjects are anonymous people inspired by a large personal collection of early 20th century photographs, although some images are of his own relatives from photographs taken by his father. Lovell states, “I think there is something really special about the photographs I’m working from now, in that my family photographs led me to doing very personal, autobiographical things. Now that I’m working from images of people that I don’t know, I feel that they represent all of our ancestors.”

Lovell sheds new light in his depictions of African-Americans who were considered ordinary men and women of their time and who often went unnoticed in history. His portraits show men and women who may not have had much materialistically, but who persevered through life with honor and dignity. In one work featured in the exhibition, we see an excellent example of feminine strength. In Cada Dia, a female figure is seated with her head boldly turned toward the viewer. Her cowboy hat and heavy clothing suggest a masculine assertiveness. Lovell incorporates an old and weathered chair into this piece that not only complements the woman’s rugged attire, but creates a sculptural environment that invites the viewer into the piece.