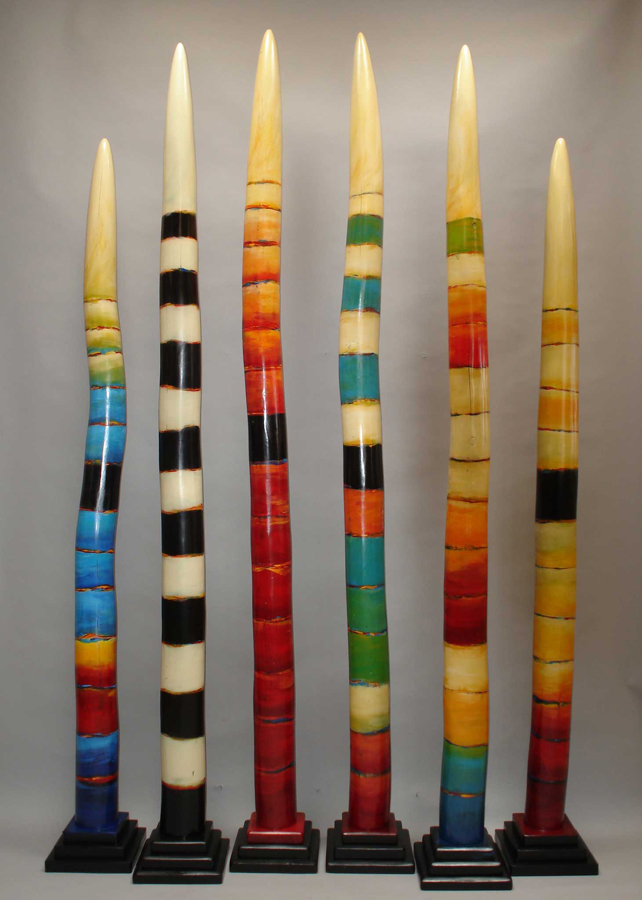 Geldersma works primarily in wood and has produced a wide array of pieces in archetypal forms, from his hanging Shamans to mandala-like totemic sculpture termed Spirit Poles. He is perhaps best known for these latter, inspired by primitive fetishes, various trans-historic ritualistic geometric designs and the vibrant cultural milieu of his native southwestern Louisiana. The artist has cited his early immersion in the intersection of such divergent cultures as French, Spanish, African-American, Caribbean, Anglo-Saxon and Native American as a major influence on his art.

Geldersma’s work is deeply interactive and intensely spiritual. He began carving totems in 1970. The artist says he was inspired by African art and wanted to make it his own, and like Brancusi he began taking the forms of African art to create his sculpture. For Geldersma, the masks and totems he sculpted were a collection of symbols joined not only as a design element, but also as an organization of a kind of psyche. The Spirit Poles are central to the artist’s private mythology and invite meditation and solitary contemplation. Gelderma says, “A lot of these begin to look back you as much as you look at them, especially the pieces with the eyes. They confront you as well as you confront them. A lot of times I make them so that they are eye level so that you have this kind of confrontation and connection with them. I think they are charged, not only because of me but because there’s something in the wood, and there’s something there.”

Geldersma predominantly employs woods such as pecan, weathered driftwood, and fallen aspen trees from Colorado. The artist’s creative process involves studying the wood and seeing the character of it with its twists and turns. “I don’t like the straight ones. It’s more like a dance, like a ballet when there’s some movement,” says Geldersma. The original shape of the wood often dictates how the totem will ultimately look. Beginning with the raw material, the artist first removes the bark with a knife and then works the piece of wood with a chainsaw to get the rough shape he wants. Using increasingly smaller tools, from grinders down to sandpaper and steel wool, Geldersma works the wood into his desired form. He then applies color either by painting the totems in bands of bold colors or by burning them to achieve deep rich blacks.