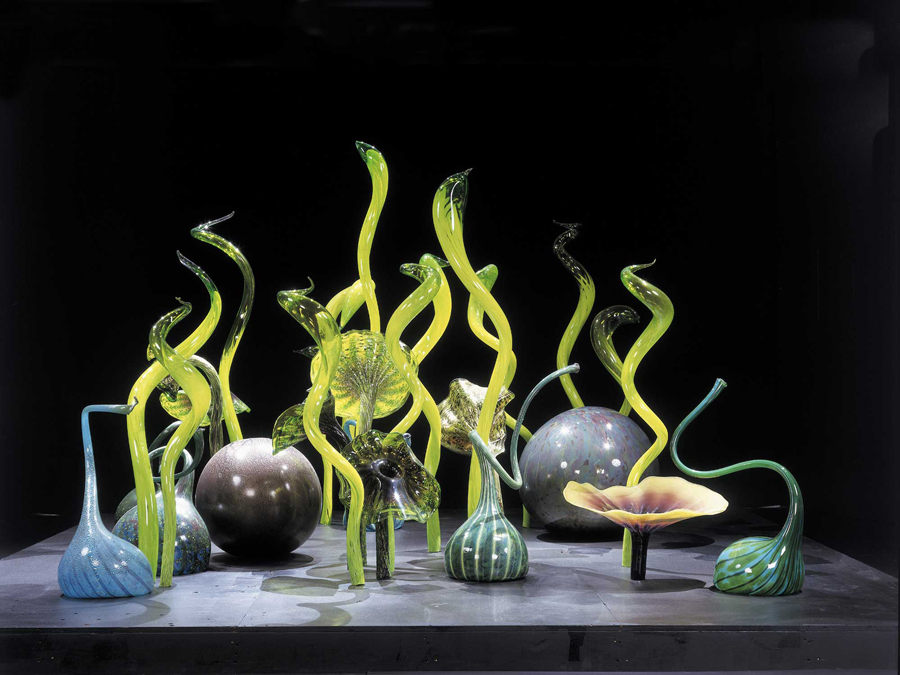 Chihuly’s inspired new Fiori series continues his move in the direction of organic, free flowing forms. Although the series evolved from his recent 2002 exhibition at Chicago’s Garfield Conservatory, Fiori, with its plantlike forms, further extends his career-long proclivity for placing forms in natural and unique environments. In this new series, which first appeared as Mille Fiori (Italian for a thousand flowers) in an installation at the Tacoma Art Museum in 2003, Chihuly revisits and refines many of the forms and techniques that have appeared throughout his career. Combined with exciting new elements, he creates spectacular installations that are true gardens of glass rather than glass forms within gardens. The artist’s fascination with gardens is strongly autobiographical. He has noted that due to his mother’s passion for gardening, he grew up surrounded by flowers, and that some of his early influences could have been the garden. The exhibition at the Arthur Roger Gallery Project will present 11 theatrical displays created by Chihuly and his team specifically for this installation from hundreds of hand blown glass elements that range in size from six inches to more than seven feet in height. The series of installations together create a dazzling display evocative of a luscious tropical garden landscape of flowers, gourds, reeds and fantastical foliage in a stunning range of colors. Flamboyant fantasy flora will be animated by natural light during the day and dramatized brilliantly in the evening as myriad organic shapes are spot-lit to dazzling effect and are mirrored in reflective platforms and in shadows behind. Chihuly’s magical River Blue Chandelier, 2004, will be suspended above the field of botanical forms. Additionally, a wall installation of works on paper will reveal a different facet of the artist’s creative process. A video display will show Chihuly and his team at work, creating glass and installing his artwork around the world. Concurrent with the exhibition at the Arthur Roger Gallery Project, an additional platform installation by Chihuly titled Mille Fiori II, 2004, will fill the rear gallery of the Arthur Roger Gallery on Julia Street. Books and related material on Chihuly will be available in both galleries.