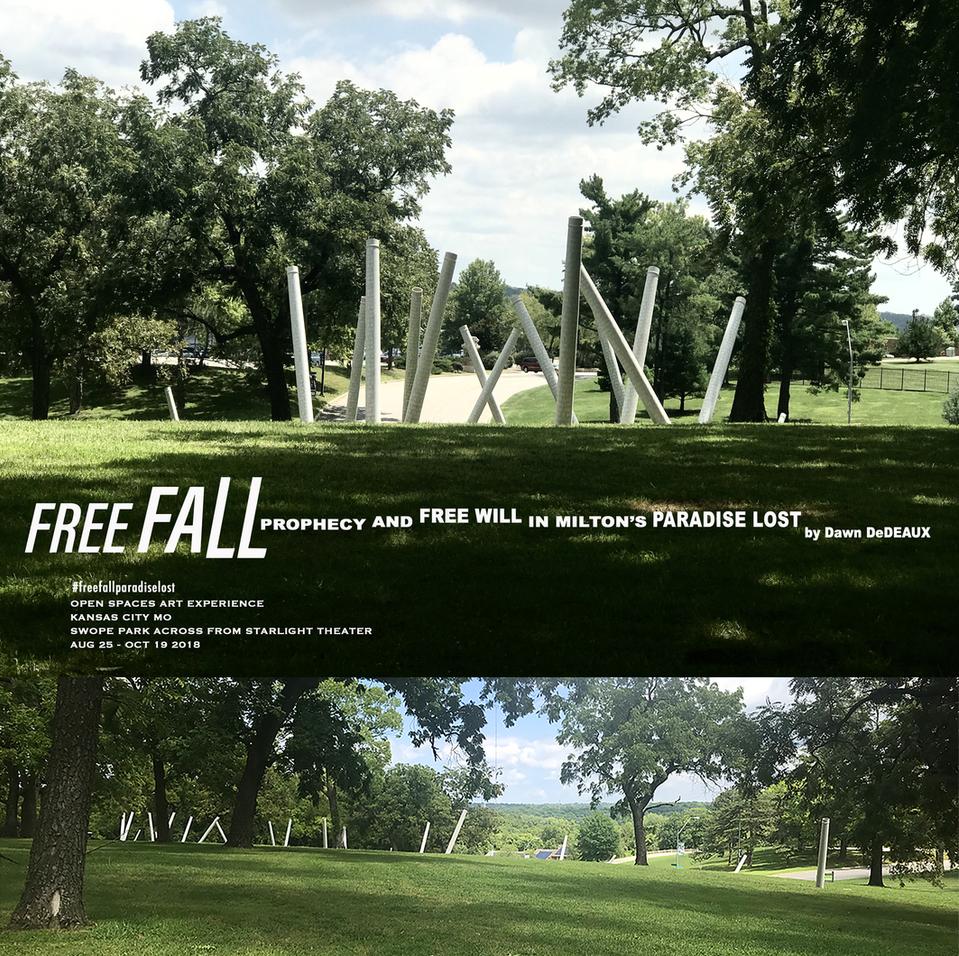 FREE FALL is a large-scale sculpture installation by New Orleans-based artist Dawn DeDeaux created for Kansas City’s international art venue OPEN SPACES led by veteran Artistic Director Dan Cameron. The work tributes ‘Paradise Lost’ by John Milton published in 1667, considered among the world’s most important literary offerings. Selections from the epic poem appear on 48 concrete columns, installed at angles as though in a state of fall throughout a quarter-mile section of the majestic Swope Park. The text is generated in highway reflective vinyl to offer distinctive appearances that vary from day to night: by day the text reads in subtle pearlescence typography; and by night the verse transforms into a glowing vibrancy before the light of cellphones and headlights of passing cars – creating a moving, ever-changing choreography of light and language.

The main installation is on a ridge in a walnut grove adjacent to the Starlight Theater and Kansas City Zoo (at the intersection of Zoo Drive and Starlight Road). At the top of the ridge, a cluster of columns suggest an archeological ruin while others cascade down the ridge face. Additional columns are sited to offer a meandering, intimate walk at woods’ edge for more accessible readings. Cellphone light both activates the columns’ reflective properties and the barcodes applied to columns to prompt corresponding audio readings.

ABOUT MILTON
All text on the columns is verbatim old English used by Milton to write ‘Paradise Lost’ – a secular retelling of the biblical account of the fall of Adam and Eve. The book also intertwines the best philosophy, art and scientific discoveries of the 17th century. One finds overture to the classics by Homer and Virgil and cosmological offerings about planets, time and the speed of light inspired by Milton’s encounter with astronomer Galileo. The fierce politics surrounding England’s Civil War and Milton’s personal involvement with the overthrow and execution of Charles I also shape the work’s extensive ethical debate.

DARKNESS VISIBLE
Among hard-core Miltonites a beloved word coupling in ‘Paradise Lost’ is “darkness visible” – inspiring the use of highway night reflective vinyl for the text that glows in the dark. In addition to ‘darkness visible’ as a metaphor for Milton’s views on hell and politics, here the illuminated text also acknowledges Milton himself and his personal crux – he was blind! One can only imagine the challenge of composing and memorizing his verses by night then dictating from memory by day: Indeed that had to make a ‘hell of his heaven.”

PARADISE LOST and FOUND TODAY
While centuries-old, ‘Paradise Lost’ reads with relevance for today, seeming at times to be a more insightful projection of our future rather than a tale of our past. From an environmental perspective it offers a prophetic nature: Are these the days, now, when our earthly paradise is lost?
Other scattered barcodes activate the verse of contemporary rap artists such as J Cole whose lyrical constructs share a remarkable kinship to Milton’s themes. J Cole offers “If this is anything like heaven, I’d be better off in Hell”; while Milton counsels that “Man can make a Heaven out of Hell and a Hell out of Heaven.” Each author shudders at their visions of the future, claiming in most cases it is “better not to tell.”

ARTISTIC AWAKENINGS
The trajectory for project FREE FALL began five years ago with the start of DeDeaux’s post-earth ‘MotherShip’ series. It was first inspired by an interview with the late Stephen Hawking who claimed we had 100 years left, not to save the earth but to figure out how to leave. A sampler from DeDeaux’s accumulated future-tense multimedia works is now on view at MassMoCA through 2019 in an exhibition titled ‘Thumbs Up for the Mothership’ where she is paired together with artist and musician Lonnie Holley. Other examples will appear in an upcoming career retrospective ‘Between Worlds’ organized by New Orleans Museum of Art.

For DeDeaux the falling columns also acknowledge the lessons of history past and present: the fall of civilizations reflected in the ruins of Persepolis, the ISIS terrorist-ravaged site of Palmyra and today’s dismantling of monuments worldwide in the reexamination of wars and heroes.

THE IMMINENCE of FREE WILL
DeDeaux’s FREE FALL is also influenced by the view from her home base in coastal Louisiana – the fastest eroding landmass in the world. “This literal ‘vanishment’ of place is due in large part to the short-sightedness of industry and politics, all supported by the products we individually buy and the people we individually elect. This complicity led me to re-conjure Milton and his identification of the imminence of free will. We either succumb to a fatalistic future or courageously commit ourselves to a bold new course.” Milton calls free will the defining characteristic that distinguishes man from other animals and the natural world. According to curator Dan Cameron, ‘if we lose our paradise on earth it will be because not enough of us exerted a sufficient amount of our free will to save it.”