by By Cate McQuaid via bostonglobe.com 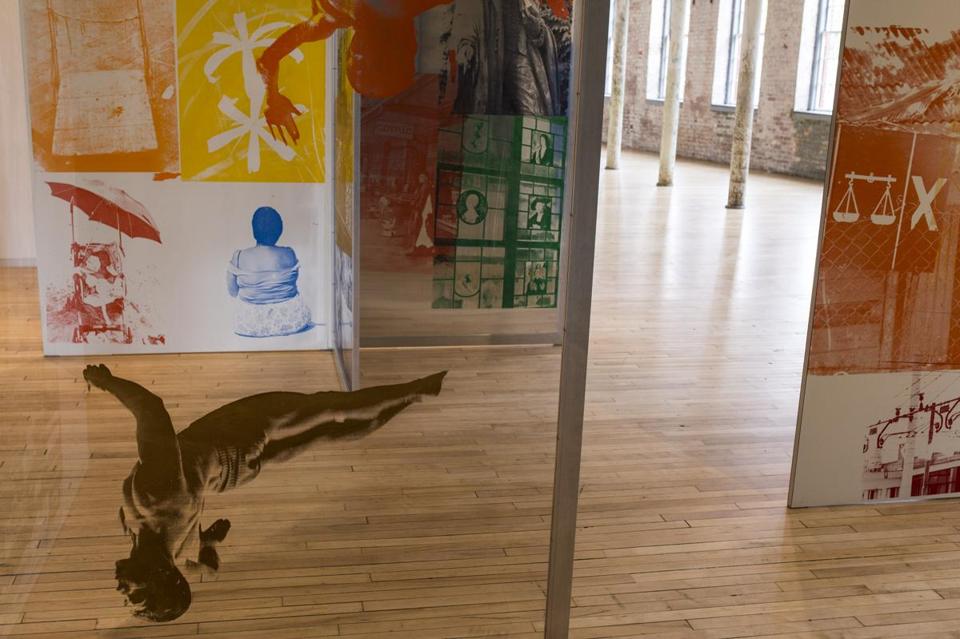 Now it’s Massachusetts Museum of Contemporary Art’s turn. The giant museum in an old factory has always been an amusement park — dazzle, with substantive side shows. With the opening of Building 6 on May 28, it adds gravitas.

The new vision has teeth. Psychosexual trauma, grief, and the devastating self-protections of governmental bureaucracy are among the opening themes of the long-term exhibitions in the museum’s new galleries.

Rest easy: Jolly good noisemakers are there, too, and airy pillows of transcendent light.

Mass MoCA opened in 1999 with a paradoxical quality of flash-in-the-pan grandeur. It had scope and sparkle. Director Joseph C. Thompson accomplished plenty with a football-field-size gallery (Building 5); other, smaller spaces; a crack curatorial staff; and a can-do spirit. But the museum had no collection; exhibitions, shiny as they might be, came and went like dreams.

Then, in 2008, Mass MoCA partnered with Sol LeWitt and the Yale University Art Gallery for a 25-year-long installation of LeWitt’s wall drawings. The museum suddenly had a keystone. The exhibit — immersive, encyclopedic, and (crucially) fun — honors a pivotal artist and gives the museum roots and constancy.

Now Mass MoCA has nearly doubled its gallery space. It has more room to show art than any contemporary art museum in the country — if you see everything, you’ll get a 4-mile walk in. And it sinks more roots.

Like LeWitt in Building 7, and a long-term, meaty Anselm Kiefer installation in a collaboration with the Hall Art Foundation in 2013, the bulk of the new exhibitions are multi-year arrangements with towering figures in contemporary art: Laurie Anderson, Jenny Holzer, James Turrell, Robert Rauschenberg, and Louise Bourgeois.

Then there’s Gunnar Schonbeck, whose goofy, sublime, interactive musical instruments invite banging and plucking — a high-spirited respite from some of the weightier art. Several other artists have works throughout the galleries.

Building 6’s design, by Cambridge-based architects Bruner/Cott & Associates, celebrates its industrial origins. Exposed brick, steel beams, and a spine of a skylight set us up for brawny, imposing exhibitions.

Coming from the enveloping, glittery phenomenon of Nick Cave’s “Until,” in Building 5, you’ll step into Rauschenberg’s installation of silkscreens on panels, “A Quake in Paradise (Labyrinth).”

Like LeWitt, Rauschenberg is a patriarch of contemporary art. Both descendants of Duchamp, LeWitt codified art as idea, and Rauschenberg turned the readymade into its own medium. This nod to Rauschenberg coincides with the Museum of Modern Art’s retrospective, on view through September.

His silkscreens depict somersaulting acrobats, a fire hydrant, a stop sign, a produce market, and more, making poetry of the ordinary. The piece is a meditative meander through what Rauschenberg called the gap between art and life, and an ideal place to begin. Like the building itself, it’s earthy and urban yet smoothed around the edges. Rauschenberg’s delight in combining disparate images forecasts the wide variety of tones and themes we’re about to encounter.

Not everything is up for years. Mass MoCA’s partnership with the Robert Rauschenberg Foundation includes exhibiting artists who have had residencies at the artist’s former estate on Captiva Island, Fla. Dawn DeDeaux and Lonnie Holley, in the show “Thumbs Up for the Mothership,” revel in Rauschenberg’s rummage-sale sensibility. They each make scrappy, Southern gothic art that wraps itself in cobwebs and seeks the light. There are only four Bourgeois works here, mythic and tangled. Not enough. But if you’re tuned to her channel, visit Holzer next.

The two may seem wildly different — Bourgeois’s fleshy, protuberant sculptures work out inner conflict, and Holzer’s heady art probes how slippery language is. But damn, both deal with abuse of power, and their messages are blistering.

Holzer’s scores of paintings of classified documents about the US war on terror capture a bureaucracy of secrecy. The most wrenching are palm prints: Those of American soldiers accused of crimes are blotted over, protected; those of prisoners who died at Guantanamo are unobscured but faint. Their hands were stiff with rigor mortis when the prints were made.

Bourgeois and Holzer make pointed, buckle-your-knees art. Anderson’s work is more open-ended and generous, like Rauschenberg’s. She invites viewers into her stories.

Her two virtual-reality works were not running when I visited, but her ravishingly sad series of enormous drawings, “Lolabelle in the Bardo,” made after her rat terrier died, was installed.

These humming, gestural charcoal drawings depict Lolabelle in the Tibetan Buddhist limbo souls occupy before reincarnation. It’s a chaotic place, perhaps reflecting the mind of the bereaved. Familiar images — the dog at her water bowl — mingle with pictures of dogs swirling through troubled skies. One closeup portrait, with Lolabelle’s eyes deep and eager, may slay anyone who has recently lost a pet.

In a brilliant stroke, Mass MoCA has put most of Turrell’s light installations on the ground floor, as if buoying the darkness upstairs. Leave his intoxicating show for last; it’s a tonic.

The artist manipulates light and toys with spatial perception. Step into “Perfectly Clear,” from the “Ganzfeld” series, a light environment that apparently has no edges. The effect is immediate, visceral, and hallucinogenic. Even his smaller works feel lucid and mystical, as if light alone can open us up, propel us elsewhere.

Turrell’s 25-year-long partnership with Mass MoCA is Building 6’s greatest coup. It’s a spectacle, like Nick Cave’s installation. Spectacle is what has always pulled visitors to the museum.

Mass MoCA is still an amusement park. It now has a better foundation and more rides.